Cover of Neuron features our CRISPRi platform in human neurons 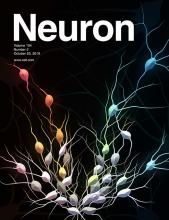 Our CRISPRi screening platform for iPSC-derived human neurons was published in the Oct. 23 issue of Neuron, and the beautiful artwork by Connor Ludwig was chosen for the cover: Neurons forming a volcano plot (the graph we use to show the results from a genome-wide screen).

In this paper (open-access preprint on bioRxiv), we present a new technology for large-scale CRISPR-based investigation of gene function in human neurons generated from induced pluripotent stem cells. We uncovered pathways that control neuronal survival and shape. Intriguingly, we found that some housekeeping genes expressed by all cell types have specialized functions in neurons. This technology is the basis for ongoing projects in the Kampmann lab, which aim to uncover mechanisms and new therapies for brain diseases, including Alzheimer's Disease and related dementias and Autism Spectrum Disorder.

The work was led by Ruilin Tian and Connor Ludwig in the Kampmann lab and Mari Gachechiladze in Michael Ward's lab at the NIH.

Read the UCSF news story describing the results for a broad audience here.