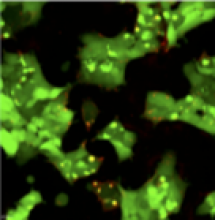 Prion-like spreading of tau aggregation between cells is thought to be an important mechanism by which Alzheimer’s Disease and several other neurodegenerative diseases progress. A major question is which cellular pathways mediate or counteract this process.

In a project led by postdoc John Chen in the Kampmann lab, a CRISPR-based genetic screen revealed an important role for the ESCRT pathway to prevent the escape of internalized tau aggregates from the endolysosomal pathway into the cytosol, where they can seed more tau aggregation.

Collaborators included the Gestwicki and Southworth labs at the IND, the Grinberg lab and Marco Hein at UCSF and the Leonetti lab at the Chan Zuckerberg Biohub.

The study was published in the Journal of Biological Chemistry.