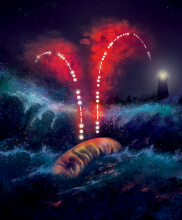 The function of mitochondria, the “powerhouse of the cell”, can be compromised in aging and disease. Dysfunctional mitochondria trigger a global cellular stress response, but how human mitochondria signal stress to the rest of the cell was unknown.

In a project led by postdoc Xiaoyan Guo in the Kampmann lab, a CRISPRi-based genetic screen uncovered the molecular mechanism by which mitochondrial dysfunction is relayed to the rest of the cell. The mitochondrial protease OMA1 cleaves a previously little characterized protein, DELE1. Cleaved DELE1 activates the kinase, HRI, triggering the so-called integrated stress response.

This newly discovered OMA1–DELE1–HRI pathway is a potential therapeutic target in diseases that involve mitochondrial dysfunction, such as neurodegenerative diseases or heart disease.

The article describing these results appeared in today’s issue of Nature: